All racks are not created equal 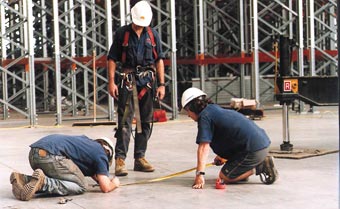 All racks are not created equal

The following article by Dr Murray Clarke, one of Australia’s leading structural engineers, provides another perspective on the issue of brand-compatible imported racking, featured in LMH, January 23, 2006.

Dr Clarke heads up the Structural Engineering Department at Colby Storage Solutions, a division of Dematic Pty Ltd. Formerly a Senior Lecturer in Civil Engineering at the University of Sydney, his specialty is cold-formed steel structures.

The availability of imported “brand-compatible” racking in the Australian marketplace has increased in recent months. There is no shortage of statements and certificates from the manufacturers and suppliers claiming adherence to Australian and international standards. In some instances, published frame load capacities have been proven to significantly overstate the true capacities by as much as 50 per cent.

These are serious concerns for the industry. It is apparent that some companies importing and selling brand-compatible rack have an extremely low level of knowledge of racking design and standards. In contrast, the major Australian racking manufacturers have a detailed knowledge of racking design and safety gained from decades of experience and involvement with Standards bodies, and underpinned by extensive programmes of structural testing.

While some might argue that it is a case of Caveat Emptor, the Australian racking industry has a clear responsibility to inform and guide the market on the important matters of design integrity, compliance with standards, and occupational health and safety. End users of racking systems cannot be expected to be experts in these matters.

Some things just don't stack up

In response to market concerns about the structural adequacy and safety of imported brand-compatible racking, Colby Storage Solutions carried out independent structural testing on a select range of imported rack components. Colby then incorporated the test data into computer models to correctly assess the load carrying capacity of the racks, which were then compared to the published values.

The results of the calculations, which have also been verified by an independent structural consultant, indicate the equipment is considerably under designed for Australian applications. The degree of under design varies according to the configuration but it has been confirmed to be as high as 50 per cent. Such a rack would be in serious danger of collapse in the event of an accidental overload or damage caused by forklift impact, and therefore poses a significant occupational health and safety risk.

There are several possible explanations for the unsafe designs uncovered by our investigations. The racks investigated were made from low strength steel (nominal yield stress of 235 Mpa). By contrast, in Australia, racking is typically made from high-tensile galvanized steel with a nominal yield stress of 450 Mpa. All things being equal, this difference in steel grade means that an upright or beam made from lower grade steel will fail long before a comparable component made from Grade 450 high-tensile steel.

Rack importers may try to dodge the issue of the lower steel grade by claiming they are using thicker, heavier components and claim this enables their lower grade steel products to conform with Australian Standards. Our investigations show this to generally not be the case.

Another possible reason for the poor design integrity of imported brand-compatible racking is that the companies may not appreciate the crucial importance of the beam-to-upright connection on the overall load carrying capacity of the system. Our investigations have revealed that the end connectors of certain imported racking are significantly more flexible and weaker than Colby end connectors. It is possible that the stiffness and strength of the end connector is not properly accounted for in the design procedures adopted by companies manufacturing and selling imported brand-compatible racking.

If taken out of context, certificates claiming compliance with standards are worthless …

Building a pallet rack is a lot more complicated than putting up shelves in the garage!
We have seen conformance certificates issued by companies distributing imported rack from China which claim the racking conforms with Australian Standard AS4084-1993. The simple fact of the matter is that such certificates on their own are worthless.

Compliance with AS4084-1993, or indeed the European industry specification FEM 10.2.02, is not just about meeting certain product characteristics. True compliance with standards requires the company to have carried out an extensive range of component tests, and to have a soundly based structural design methodology (often encapsulated in advanced software programs), which enables the interaction between all the components in a racking system to be properly assessed. Design adequacy can only be quantified in relation to the weights of the pallets stored in the racking – a rack of a given configuration might be adequately designed for 500kg pallets, but grossly under designed for 1000kg pallets.

The reality is that pallet racking and other types of industrial storage systems are very complex structures that need to be professionally designed to suit the application.

Given the potential for serious accidents to occur if sub-standard rack components find their way into an existing rack structures, we would caution anyone against purchasing such equipment for this purpose.

If anyone is considering purchasing imported racking, our advice would be for them to seek independent structural engineering certification of the structure to ensure they fulfil their duty of care and protect themselves from the potential legal ramifications should the equipment fail during use, putting life at risk.

Europe has traditionally been the global leader when it comes to the design of pallet racking structures, with the world’s leading authority on storage system design, the Federation Europeenne de la Manutention’s (FEM) standard, FEM 10.2.02, representing the culmination of decades of R&D in racking design.

Because the Australian standard has not been revised for many years, Dematic Pty Ltd (incorporating Colby Storage Solutions) became the first Australian member of FEM. Our participation in FEM ensures we are continually benchmarking our designs against the best in the world, ensuring customers receive the most structurally and cost-efficient storage systems that provide world’s best performance and safety levels.

A key project for Colby Storage Solutions over the past couple of years has been the development of advanced rack design software Colby RACKMAN. RACKMAN utilises finite element modelling and second order analysis to rapidly develop and verify rack designs, which are fully compliant with AS4084-1993 and/or FEM 10.2.02.

With more than 40 years experience, four talented structural engineers, a team of skilled storage system designers, and a national network of distributors offering fast, responsive service, Colby offers safe and proven storage solutions for 100s of applications across a wide range of industry sectors. Colby Storage Solutions provides customers with an unbeatable combination of expert-designed, quality made products and services, and our national buying power ensures customers get maximum value for money at all times.

The above article is reproduced from Colby Storage Solutions